I’ve been following every form of motorsport since … forever, and while I still love the raw noise and smells of being trackside for real, online racing is getting bigger and better. But this is more than just sitting on your La-Z-Boy with standard controller in hand, the fast drivers are all using dedicated setups – some of the best racing simulator cockpits have been made for this purpose, and this purpose only.

With some famous race drivers seeing the benefit of sim racing (such as Sebastian Vettel and Felipe Massa regularly honing their skills via sim racing), you have to think that this is more than just a few buddies getting together online and racing for bragging rights on the next big night out – this is serious competition.

With that said, these race simulator cockpits that I’ve reviewed are priced well enough for those guys and gals (definitely aren’t talking professional monies), but still offer a genuine level of ‘simulator experience’ that a gaming steering wheel attached to your desktop via little rubber suckers just can’t.

Before going too far down the rabbit hole of online racing and gaming, it’s important to understand that what we’re talking about, isn’t the full professional setup that you’d find in the headquarters of Rousch or Ferrari (or whatever team and series you follow) – this is purely about a setup for your home entertainment, using a gaming system such as the Xbox One or PlayStation or a PC.

With that in mind, you need to think about whether it can be a permanent setup that’s never moved, or has to be something more practical that can be brought out or put away easily, to an extent, this also means the choice between something with a seat, or without.

Even after thinking about that, there’s still further choices – do you want one that folds up? Or just slides out of the way? Is space that limited that you might need something that could easily fit under your bed? Or in a cupboard?

While I’d managed with just a wheel & pedal combo thing for race games where I’m racing the game system AI rather than online competitors, when I finally made that transition to racing other real-live humans, I found that I really needed a simulator setup (or at least that’s how I justified it to myself!).

I’ve spent plenty of hours in a race car, so my priority was to feel comfortable, I didn’t want to be overstretching for anything, and I wasn’t going to ‘make do’ with a slight annoyance, because that would be a major hindrance over time. Finally, the most important factor for me personally, stability – you don’t want to feel like you’re teetering on the edge of falling over.

I’ve labeled these as the best sim cockpits, but the reality is that your needs may be different from mine – I have the space to have a dedicated setup, no one else uses it – what works for me might not be so good for someone that’s a bit more svelte.

With that said, there should be something in this list that will work for you. 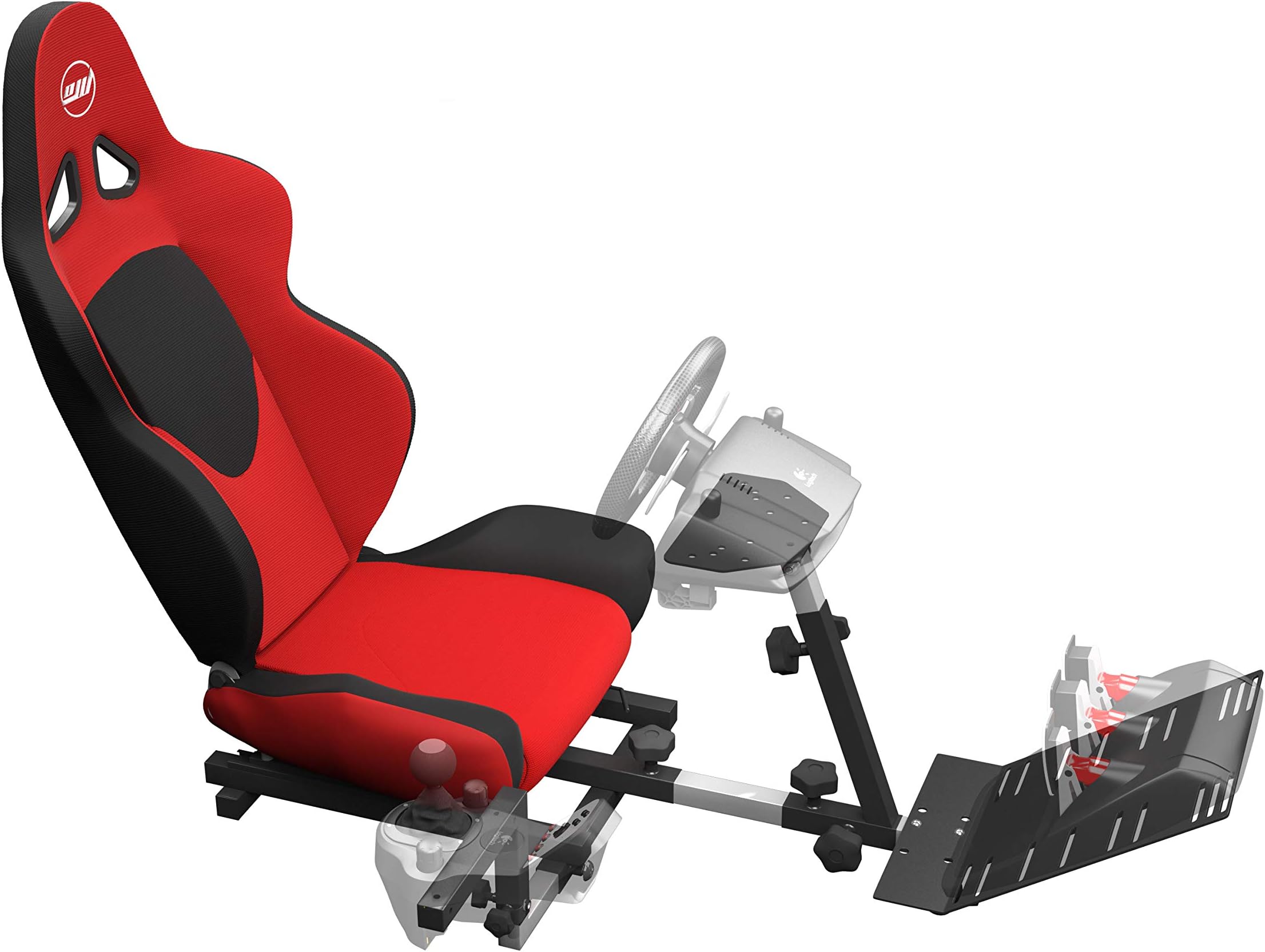 Like all the other cockpits here, this does not include any game wheel, pedals, shifter etc, this is for the stand only.

It’s available in a number of different colors – the base color being black, but you can have that with red, blue, green, orange, yellow and black, and it will fit nearly all of the most popular makes of wheel and/or pedals – like the Logitech G29 or G920, all Thrustmaster setups, same with the Fanatec, and of course it’s completely independent of the system or console – it doesn’t matter if you have a PC, PlayStation or Xbox.

It’s a sturdy metal frame, with an almost limitless amount of adjustment, the platforms the pedals, wheel and shifter mount (which can be mounted on either side) to have multiple positions, which means you’ll easily find a position that suits your driving style and gaming system setup (whether that’s low down, laid out like an F1 car, or something more upright like a WRC car).

Along with the usual wheel & pedals combo, you can also fit a shifter and a handbrake, together – there’s space and mountings for both (particularly hand for rallying games). There’s also a couple of other important factors – this thing is stable – no rocking or teetering, and there’s no weight limit capacity – many setups have a maximum weight limit, which is fine in most cases, but start looking at 250lb + and choices are limited.

The OpenWheeler GEN2 is been completely designed, built and even packaged in the USA, and aside from mounting the gaming peripherals, it’s ready to use out of the box, and it does come with everything needed to make adjustments.

If you’re looking for the all-in-one, that’s a little more permanent, this is it. 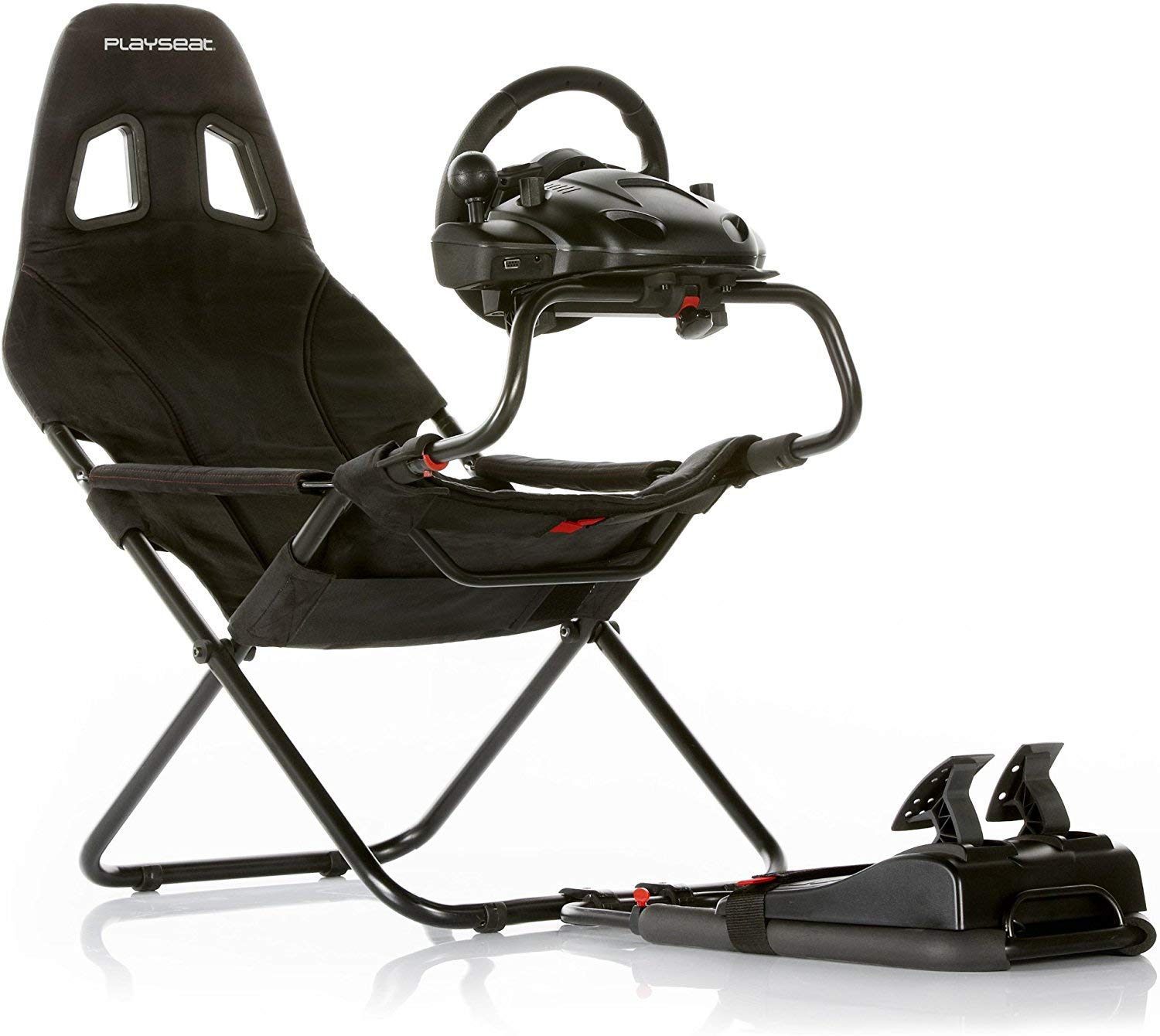 Let’s just get this out of the way before going in to details – this has been wrongly criticized as ‘an over priced lawn chair’. Yep, it does have a similar style in that it collapses in to itself for storage, but that’s where the comparison ends – it’s well made and pretty heavy duty, unlike a cheap lawn chair.

Besides, with drivers such as Sebastien Vettel choosing PlaySeat for his sim racing (although not this particular model), you just know that the quality has to be there.

The patented collapsible design makes storing this sim easy. The seat itself is covered in a suede alcantara fabric, which is what you’ll find in a number of proper sports or race cars – so it gives it an extra dimension of reality. Despite having a strong, powder coated steel frame, the chair will only support weights of up to 200lb, and it will fit people from 4’ 7” thru to 7’.

It fits with most of the regular pedal and wheel sets – Fanatec, Thrustmaster, Logitech and MadCatz for example, and of course works with all consoles and PCs. Most users of the PlaySeat say that it’s super comfortable, and very stable, and given that it’s a foldaway chair and mounts, that’s quite surprising – you’d normally find that temporary setups aren’t that stable (or comfortable).

If you’re looking for a hybrid type arrangement – a chair that’s stable & comfy but still easily stored, the PlaySeat Challenge is the one you want. 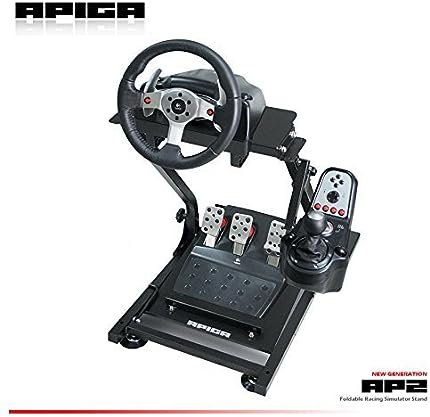 The Apiga setup is purely for the pedals, steering wheel and shifter – there is no seat, and no accommodation for one either – you’ll need something like a computer chair to make this work for you.

Ordinarily, the separate wheel & seat combination doesn’t make for a great racing experience – it feels quite disjointed (which of course it is), but obviously there is a need for that sort of setup for some people – maybe space is tight and they simply don’t have the room. One thing’s for sure though – this isn’t down to pricing – this is the second most expensive system in the list, and not far behind the OpenWheeler GEN2.

This driving simulator is a foldable stand, very stable & sturdy, and they say that it’s the ‘world’s first dual pole design’, although I’d have to question that I think – seems like a pretty simple ‘A’ frame stand to me. They do say that it’s height adjustable, along with the angle, but there’s only two angle changes, and they aren’t that different to be honest – it really needs more adjustment on the pedal mounting plate.

The APIGA AP2 racing simulator will hold all the regular wheels & pedals, with pre-drilled holes for most of the popular makes, and it can also hold a shifter (which can be mounted left or right). There’s no tools needed to set it up or adjust. It uses non-slip runner feet to stop it moving along the ground, but thanks to the design and weight, it can be a little top heavy, which means if you’re getting a little vigorous, you’ll start lifting the front up as you pull on the wheel.

Unlike other racing sims using this sort of design, there is an accommodation for a racing seat (which is sold separately), but for a few extra dollars you can buy the GEN2 that comes with a seat.

If space is tight, or you just need a simple stand to mount your pedals and wheel to, rather than a desktop, then this could be the racing simulator for you. 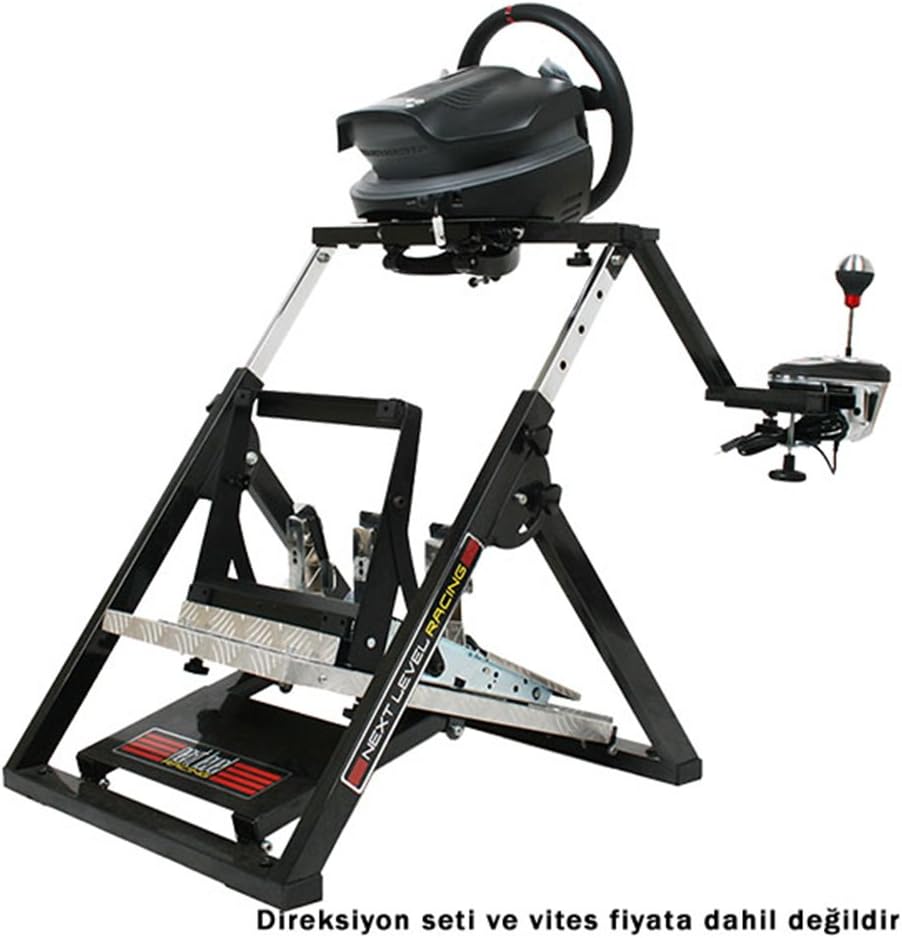 This is a patented design, and they make a big thing of ‘no annoying pole between your legs’, but as far as I can see, a great many of these racing sim cockpits have a similar feature. I like this sim cockpit because it’s multi-adjustable, which means you can pretty much place everything as you would in a real race car – you can mimic a realistic racing driving position.

Same as the others, it’s compatible with most of the gaming wheels and pedals, and you can also mount a shifter on either side. Once everything is mounted correctly, the adjustment is fantastic – find your position and keep it – it all folds up neatly and securely for easier storage.

The Next Level steering wheel stand will accommodate anyone from 4’ right through to 6’9” (it doesn’t specify a weight limit). The real diamond feature of the Next Level setup is customization and accessories – you can buy everything from a racing seat mounting, monitor stands (to hold either 1 x 55” monitor or 3 x 30” monitors) gaming desktop, flight pack, floor mats (much needed) and a motion platform.

Despite the base system being a little … basic, the fact that you can add on the other bits makes this system great. You can effectively build a complete race simulator as you may find in more professional gaming arenas, or perhaps even in a car manufacturers test facility – almost an entirely self-contained simulator experience – if you could wrap it in bodywork, this thing would be awesome.

If you’re looking to the long term, and want an almost standalone platform simulator, then the Next Level pack should be looked at. The unit is fully customizable, fits with all systems and accessories and offers you an incredibly ultimate racing experience.

Knowing what space you have will help to make the decision, as will knowing what you actually want to achieve. Showing your buddies a clean (virtual) tailpipe is one thing, but if it’s semi professional racing you want, then you need it to be as close to a race environment as possible, and for me, that means a fully adjustable setup, with seat.

You should also consider that most drivers using this type of setup can instantly produce quicker lap times. Thanks to better controllability and finer inputs – controlling a bit of oversteer is easier with a proper wheel, and of course, the pedals give you much better refinement for inputs. Despite being a digital speed control, the standard controllers can steel feel a little like an on/off switch, a pedal allows for much more control – you can actually feather the throttle as you would in a real car and let’s not forget, many of the newer race cars use a drive by wire system now – just like you get here.