I loved playing with RC cars when I was younger (OK, who am I kidding, I still love playing with them), but sometimes … sometimes they weren’t that great; too slow, short run times, not enough power … and that’s before we get to the endless search for batteries to power them. But these cars here … these are some of the best RC cars that are available right now.

Thankfully, unless you’re really a gearhead, RC drones have become the new, favorite, must have toy, and that means that prices for the cars are getting lower, all the while the specification is higher – things such as brushless motors mean more power, more speed and crazier stunts, and yet the prices just keep on falling.

That’s not to say that you can’t buy a really high-end model, but first you need to understand what you want from it. I’ve got all the answers you need, … let’s start with the basics.

My first ever RC car was a jet-black Porsche 911, it struggled to ride over any surface that wasn’t almost marble-like, and turned by reversing in a circular motion, it wasn’t great. With that said, it was the 80s, and I was only about eight-years-old. I didn’t need hi-tech.

In the intervening 30-odd years, things have got much better: full 4-wheel drive, disc brakes (yes, really), enough power to tow you along, proper suspension, aluminum chassis’ … almost a very real, miniature car. So ask yourself … what are you going to do with it?

You want to just bash around for a bit, putting it away when you’re done and forget about it? Learn a bit more about setting them up and rebuilding them? Customize it? Race it?

For what it’s worth, putting aside the toys, I’d always look at what accessories come with it, and how easy it is to get spare parts (forget customizing for the minute). Any RC car that has a halfway decent turn of speed is going to get crashed (and trashed), without fail. But breaking components isn’t the end of the world, providing you can buy replacements easy enough.

You don’t want to be stuck without a car thanks to a five-dollar steering knuckle.

Many standard cars are great fun, right out of the box, but the problem with that is that everyone thinks the same … ‘straight outta the crate’. Half the fun with sporty RC cars is making them faster, look better, stop better … just everything better.

But if all you can get is just standard parts, then the fun can soon go … especially if it’s a bit down on power – controlling a drift or 4-wheel slide is just as entertaining with an RC car as it is with the real-life version.

From body shells, through to suspension, motors, faster servos, chassis’ and even wheels, a decent RC car should be capable of switching them all out for an upgrade.

What could be another expense, or something else to think about is the radio gear – the actual ‘remote’ part of the remote control. Some of the high-end cars sell the radio gear separately – most serious RC users have their preferred brand, and usually a fair bit of spare gear that can easily be transferred from a boat or whatever else they use.

You also need to be able to switch out the frequency of the radio, usually done with swapping a crystal in the radio – two cars using the same frequency will run haywire, or at best, run together, which means bashing around with friends just doesn’t work. Of course, if all you’re doing is scrapping about in the yard, that doesn’t matter so much, but for anything else, make sure the frequency can be changed. 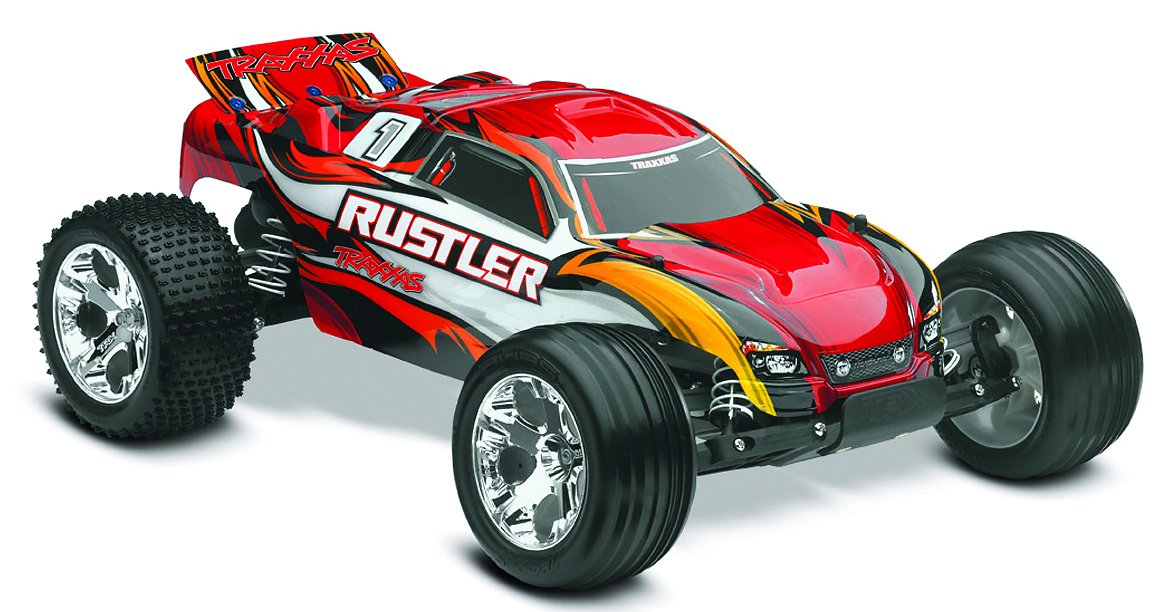 Traxxas say they’re the #1 name in ‘RTR’ – Ready to Run RC cars, and the Traxxas 37054-1 is certainly well-specced up. This is kinda the middle of the road RC car, we’re not talking ‘toy’ cheap, but certainly not high-end (wait until you see the Traxxas XO-1).

Straight from the crate, it will run at around 22mph, and swapping out the pinion gear from the standard 16-tooth to the (included) 28-tooth gear will give you a top speed of around 35mph – it’s no slouch, that’s for sure. It’s also rather unique in that it has a ‘training mode’ which basically cuts the power in half, but keeps all the other functions (like brakes) the same. A useful mode for those that aren’t used to RC cars, or a bit out of touch.

All of the electronics are waterproof, so the car can run pretty much anywhere without fear of damaging anything, or worse still, losing control. A 3,000mAh battery gives a relatively long runtime, and the smart rapid charger (as much as 10x faster than some of the competition) are included.

There are some limited tuning options – the shocks are oil filled, so by changing the oil viscosity you can change the suspension, of course steering and geometry are tunable, but this car is aimed at the people that just want to bash around, rather than getting in to full tuning setups.

My number one choice for the all-rounder. 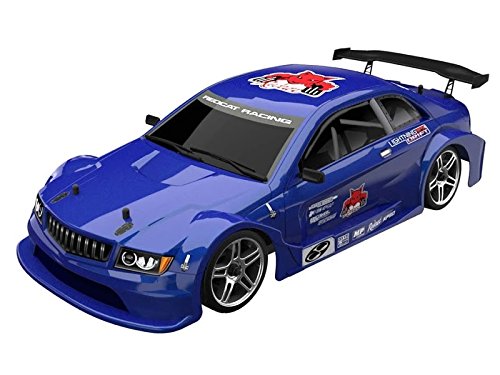 This is purely about drifting – this isn’t an all-rounder, although with some work and different tires it could be setup for just about anything, don’t buy this car unless you specifically want to get in to RC drifting.

It has a poly-carbonate body (great for taking the odd knock or two), a completely waterproof ESC (Electronic Speed Control) and all-wheel drive. The tires have been specifically made for drifting – they do offer limited grip, but they help to control the car when you finally manage to perfect the full four-wheel drift round your furniture or yard.

Could do with a slightly bigger battery – it’s just 2,000mAh as standard, however as with most of these cars here, it’s all upgradeable, in fact, the Redcat comes with a complete catalog of fully upgradeable brushed aluminum parts. 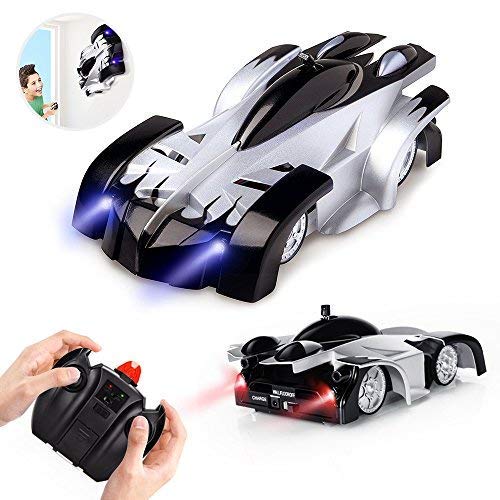 This is a novelty, a toy, and I’ve included it here as A) it’s very cheap and B) it climbs walls, hangs on to ceilings and rides on glass … this isn’t your average RC car. The design is simple – a small vacuum and almost sealed underbody means it can suck itself to the wall (providing it isn’t too bumpy), but should you just want to drive it normally, you can switch between wall or floor mode.

It can be charged either through the remote control with the built-in lead, or through a separate USB point (like on your computer). EpochAir also say that it does ‘stunts’, in reality what this means is that it can rotate through 360 degrees at the push of a button. It also has LED lighting at the front and rear, which changes depending on which way you’re driving.

All in, the kids will love driving it on the ceiling. This has to be the best choice for the little‘uns. 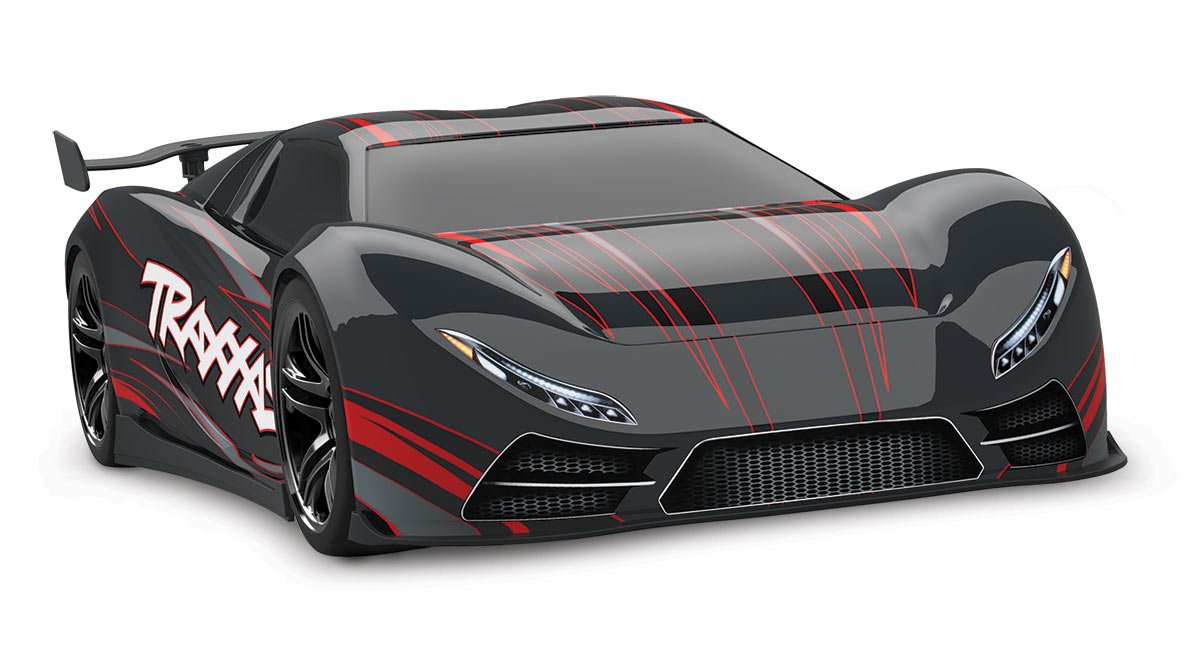 This just has to be the daddy of all RC cars, and not just because of the pricetag.

Yes, you read that right, and it isn’t a typo – one hundred miles per hour. I feel like I need to say that again … ONE HUNDRED MILES PER HOUR. Oh, and I haven’t finished … it does that in UNDER 5 seconds (4.92 to be precise). To achieve this, Traxxas have fitted the XO-1 with all manner of cool stuff, including telemetry with real-time data sent to the specially developed ‘LINK’ app on your phone or tablet.

The app can show speed, battery voltage, RPM and temperature. Not only that, but it’s fitted with the Traxxas Stability Management system (believe me, you WILL need), a cush drive (for gentler starts), reinforced steel-gear differentials (which can be tuned through the use of different viscosity oils), steel CV driveshafts which are splined, aluminum C-hubs / steering knuckles / axle carriers and shock towers, and the biggest ‘big block’ brushless motor ever fitted to one of their cars.

Definitely, without doubt, my number one choice for … speed, technical gizmos, coolness … anything.

Everything will seem a little … meh … after the XO-1, but the Mustang by Traxxas is still a pretty handy RC car, and it’s officially licensed by Ford, which means a lot of the details are correct … it’s more than a toy.

Still capable of 30+ mph (which is fast for an RC car, but … 100mph?), and uses the all-new 4-Tec 2.0 chassis which helps to keep the center of gravity low, and coupled with the aggressive street tires, this makes for a great all-rounder.

If you’re a Mustang or Ford person, then this is the must-have RC car, also add a few bucks on to the price because it doesn’t come with any battery or charger. 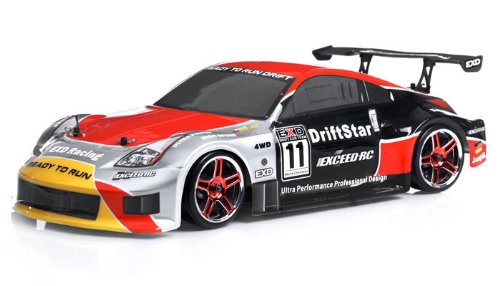 Another drifter, and watching the videos about it will make you smile … the slo-mo, full opposite lock action is incredible.

Another RTR (Ready to Run), but that has lots of setup opportunities and customizable parts – the shocks for instance are threaded, which means you can adjust them just as you would a real set of coil-overs, the camber and toe are easily adjustable for the perfect handling, and the suspension arms are all lightweight – this has one purpose only – styling out those corners and bends.

It has purpose made, solid compound drifting tires, full four-wheel drive and high power brushless motor, with an extremely low center of gravity, this would definitely be my choice for a drifter. 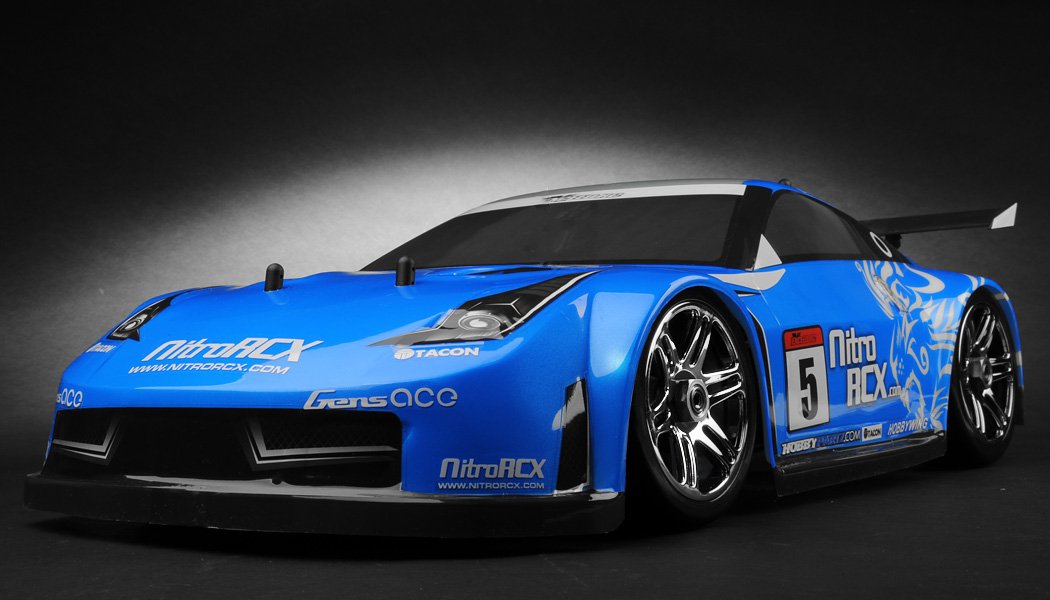 Similar to the Drift Star, but just more … more power, more tuning, bigger and plenty of opportunity for setup; changing the oil in the differentials (which are easily reached) changes the entire nature of the car, full aluminum chassis, and brushless ESC (Electronic Speed Control) and motor.

The 3,300mAh battery gives plenty of run time, but EXCEED-RC have pared back the price a bit by not including any type of charger.

For me, I prefer the larger size, and like the fact that you can really change the setup, almost to a professional level, however, that could be the problem for the more inexperienced driver. 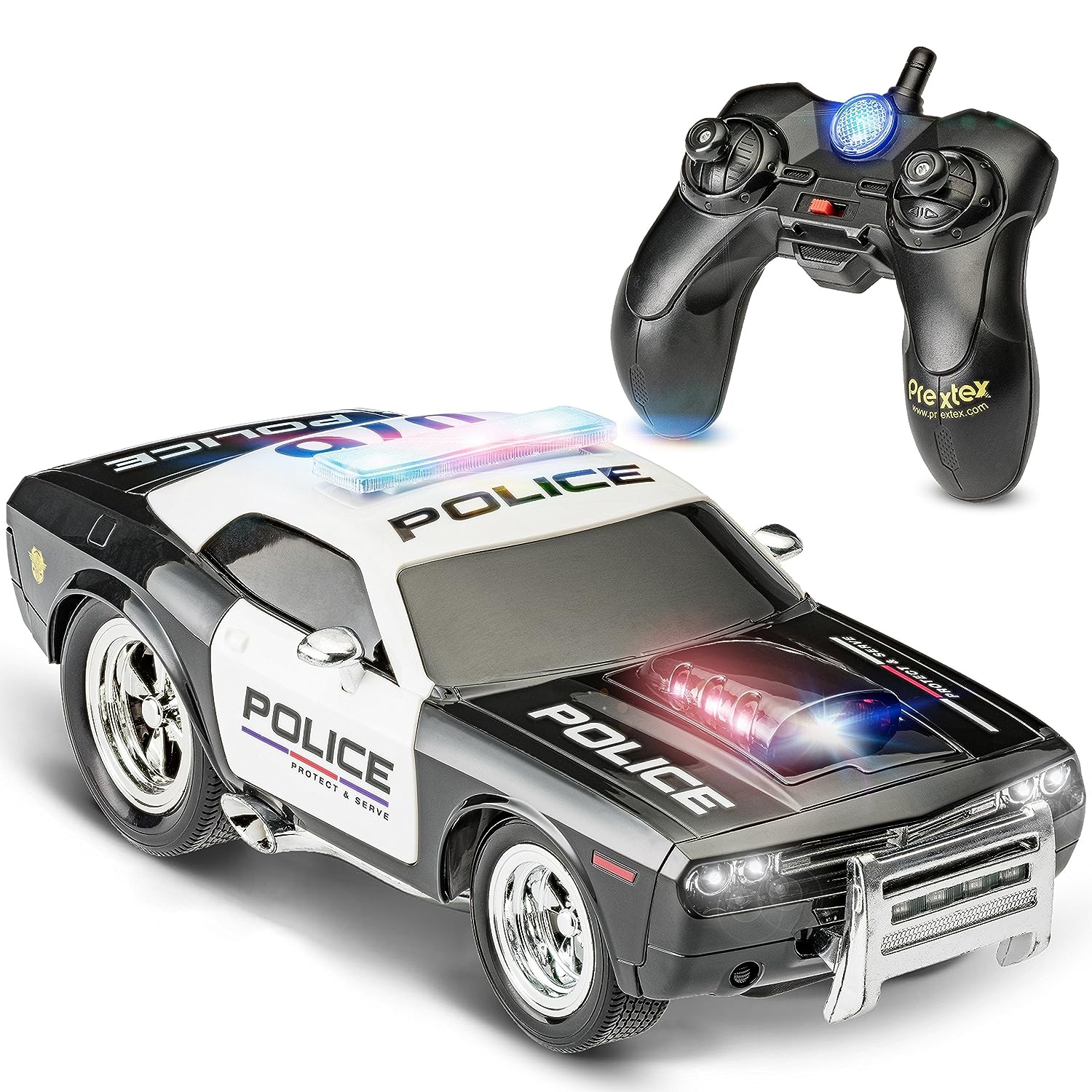 Again, similar to the EpochAir, this really is just a toy, aimed at small children. The fact that the ‘siren’ wails about as loud as a genuine police car makes for great fun for the kids, not so much for their parents. Thankfully, the sound can be switched on or off from the remote control.

Has plenty of flashing lights to go with the siren, and by all accounts, it can take some pretty heavy abuse without breaking … a prerequisite for any children’s RC car.

For me, of course I’d pick the crazy fast XO-1, but only if I had the room to use it … it’s not going to be something that you could max out in your yard, and even then, with plenty of room, I’d be very wary about driving it hard if there were people around – hit someone at 100 mph, and you’re facing legal action. Should also consider that it will easily go from 1 to a million pieces in the blink of an eye – get plenty of spares!