The Subaru BRZ isn’t quite that straightforward; it’s also the Toyota GT86 or FT86 and the Scion FR-S – it was a joint project between Toyota and Subaru, and many consider it to be a fine handling, sporty car, just needing a little more ‘get up & go’ to be really interesting. Hence the turbo kits.

For a long time, modifiers and engine tuners have relied on forced induction as a cost-effective route to easy horsepower – change the engine controller, maybe fit a bigger turbo, and hey presto, instant horsepower. But when the engine is naturally aspirated, it requires much more work to make it reliable, or even usable – often needing a change (lowering) in compression ratio to avoid damaging the engine.

Most experts agree that the standard engine can cope with around another 100 hp in standard form, start pushing the envelope a little harder though and you’ll need to think about strengthening the internals – and that’s going to get expensive.

You should also think about the additional costs and components that you’ll need – it’s not just a question of throwing on a turbo kit and that’s it all done … with a minor increase in horsepower, the clutch and driveline should cope, although I’d be tempted to fit a new clutch anyway, but let’s think about big numbers (some of the turbo kits can max out at over 600 hp, and that’s wheel horsepower, so closer to 700 hp at the crank).

Are your brakes up to the job? Can you fit bigger? Or perhaps you need bigger wheels? And tires. There’s plenty of thousands of extra dollars right there. Would you use all the standard hoses under the hood? I wouldn’t. And what’s your suspension going to do? Yes, the BRZ may be a great handling car, but if you’re doubling the power output, you’ll soon find the weak points.

I’m going to be honest … modifying a car, looking for bigger power figures … it’s a slippery slope that you should really only think about if you have deep pockets. Plus … I doubt you’ll even get to the end of the first round of modifications before they’ve changed and you’re looking for more – in thirty years of modifying cars, I’ve never once met a customer that just does one mod, on budget and never touches it again … it’s like crack cocaine … don’t start, and if you do, say goodbye to everything else you love.

Here’s my issue with this sort of stuff … forcing your engine to make another 60, 70, 100 or 200 horsepower goes against what the manufacturer is happy with. Of course they build in safe tolerances, and they’re thinking longer term – they want the engine to last for a predetermined amount of mileage, and changing the horsepower level will change the reliability.

Some kits (in theory) will bolt straight on to what you have now – literally just pop the hood and start installing, but what if your motor is already a bit tired? Is that cylinder head gasket going to hold? Will the transmission cope?

Don’t expect to go back to the dealer and claim on the manufacturer’s warranty – they’ll still be laughing as you’re waving your conrod about, semi-melted piston dripping off the end of it … trust me, I’ve done that (seen the devastation caused by non-professional installs).

I’ve spent some time warning you of imminent problems, that does not mean I wouldn’t do it personally … there’s nothing like some extra horses roaming around under your hood.

For the main part, I’ll be talking about the regular kits; there will be added options available to you, choosing to go for the big hp numbers for example, but I’ll try to keep it as simple or as relevant as possible – if we start going down the rabbit hole of technical details, who knows where we’ll end up?

Full Blown Motorsports offer a few different turbo kits for the BRZ / FR-S combo, including a ‘Premium’ stage 1 kit. In their own words, they knew that some customers weren’t able to come up with the goods for the premium kit, so they’ve made a … more cost effective … kit to suit those customers.

They’re still looking at the same level of performance as the premium kit, but they’ve managed to pare the costs back a little by using CNC machines for bending the pipework, modifying the intercooler to use cast aluminum tanks, swapping to a 39mm wastegate and most importantly, losing the license fee as many modifiers already have that taken care. Be aware though, that you’ll need to extra to the base price if you need the license or hardware to mod the ECU.

It’s a comprehensive kit, and seems to be well engineered and designed, I guess I would add that it really is the bare minimum to get started. For my money, I’d need to see some of the extras included in the kit as standard for peace of mind, but that’s from an automotive engineer’s point of view … I fully understand what bits do certain jobs, and what extras could help to make the job or performance more reliable or drive-able. But we shouldn’t forget that this is the whole point of the kit … this is the most cost effective route in to turbo charging the BRZ.

The kit includes as standard:

This is the cheapest way in to forced induction for your FR-S or BRZ. You can expect to see power gains around 100+hp, although of course nothing can be guaranteed because every engine is different, and to a lesser degree, your mechanical skills could also have an effect. 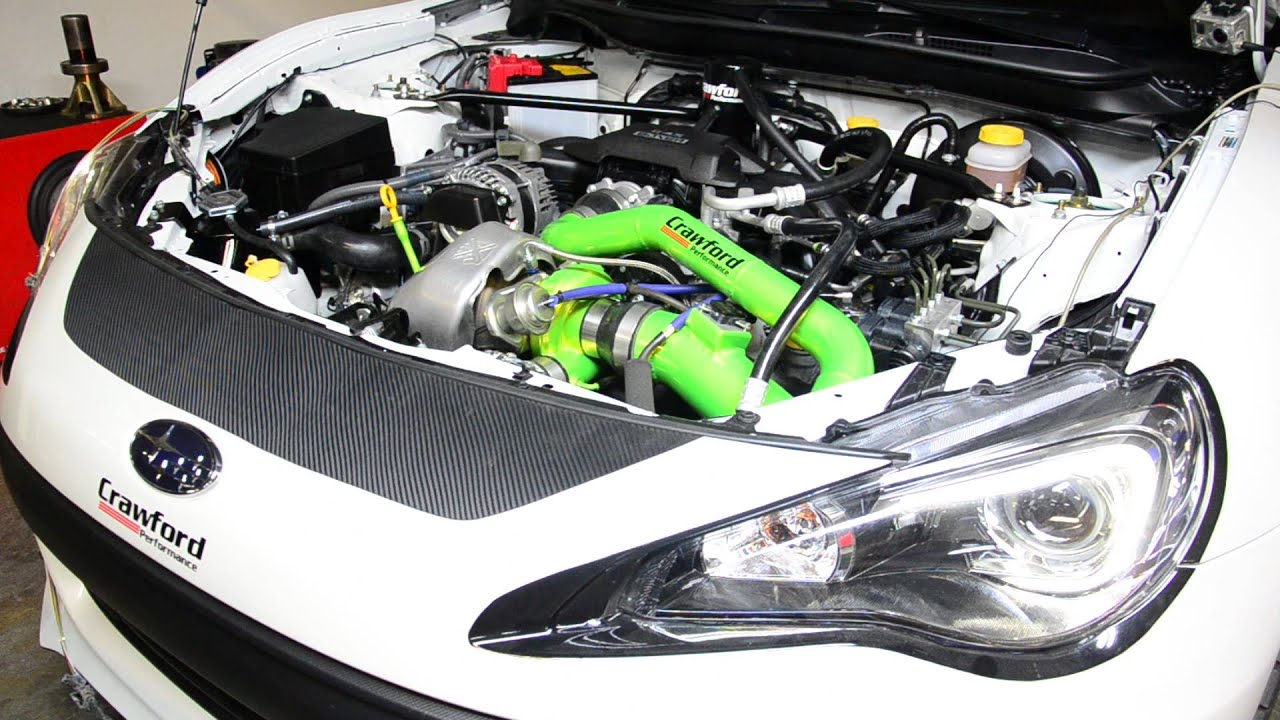 Crawford say that they were the first company to successfully design, build and test a kit for the BRZ, and what I like about these kits is that they offer a number of different kits, easily identified and all building on top of the base kit. You can choose a PLUS 100, PLUS 130 or PLUS 200 (which of course relates to horsepower), but be aware that anything above the PLUS 130 is recommended to have the rebuilt and modified engine.

The kit uses a custom built twin scroll turbo, which helps to eliminate any lag, with full boost happening between 2,500 rpm – 7,500 rpm. It should feel quite drive-able without seemingly waiting forever for it come on boost.

They also say that although it’s offered in set stages, the kits themselves are completely customizable for ‘power goals’, which means you can pretty much pick a number and dial it in, but I’m guessing for that to work properly, you’ll need everything, including the crate bottom end which has been designed to withstand big horsepower numbers, or you’re going to be looking at a huge molten pile of pistons and possibly banana-shaped conrods.

The kits come with everything you need to successfully install some extra horsepower, these include:

This seems to be a well engineered kit, with thought given to what’s actually needed, and how it’s all going to work under the hood. A great choice if you’re new to forced induction. OK, this is the most expensive kit in the list, as an engine guy, I can see why it’s more expensive, and the added benefits that you’re getting for the money.

This is their Stage 2 kit (I’ll come on to ‘stages’ in the conclusion), and essentially what you’re getting is something akin to a factory install. It’ll give around 90hp and 90ft/lb of torque (remember that no power figures are guaranteed) all while working on as many stock components as possible, which means it looks almost like it was there from factory.

I also like the fact that they’ve clearly thought about the engineering, about how the install will affect the car, and that due to that, it’s still smog legal in 50 states under the CARB executive order D-748.

They say that there’s hundreds of hours gone in to design, development and testing, and from what I can see (things like proper ceramic coating on pipework), I can well believe that – it’s almost like this has been designed and built from an engineers perspective, rather than a modifiers viewpoint. It uses the OEM airbox, exhaust manifold and also retains the catalytic converters.

There’s no doubting that you could get more horsepower with other kits, but that’s missing the point of the kit – this is designed to be reliable, functional and trouble-free; giving a much needed (and sensible) boost in power without getting all shouty – it’s discreet, and that’s a big plus point for me.

So what’s in the kit? Everything you need to complete the install and get going:

Thanks to the ‘standard’ nature of the kit, there’s no need to extend any wiring or remove the oil pan, and fitting is straightforward, the ECU recalibration is also included in the price.

This would be my choice if I was looking for a sensible upgrade without going overboard – an increase of around 1/3 is usable, and pushes power closer to 300hp, which for an everyday car, is just about right.

I mentioned that I’d cover off ‘Stage xx’ in the conclusion … having spent many years doing this sort of work, and dealing with hundreds, if not thousands of customers looking for similar, I’m going to stick my neck out and say that I’m not keen on the term ‘Stage 1 (2 or 3 … however far)’ because it doesn’t really mean that much.

Yes, if a customer is only ever going to deal with you and your products, it has some relevance, however when it’s an open market with numerous suppliers, it leads to confusion and possibly some mis-selling. For me, I always preferred the old fashioned way of naming kits … ‘The Hurricane’ or whatever, because no two customers are alike, and it lays it out clearly for them – they aren’t trying to compare a Stage 1 kit from ‘Bills Auto Emporium’ against a Stage 1 kit from ‘Tuning is Us’.

Before you rush out and spec up one of these kits, remember that this really is only the start of a long journey. Yes you can fit one of these kits and be happily on your way, but it’s the little extras that will start making the difference – finding big lumps of horsepower is relatively easy with forced induction, but it shouldn’t end there … this is where specialist knowledge and attention to detail starts coming in to play – none of these kits come with a performance air filter for example, nor do they mention anything about having the injectors serviced, which would be the one of the first things that I’d have done.

I’d also add that I’d change out the cooling pipes – your engine is going to be working harder, producing more under-hood temperature, and a failure in the cooling could be catastrophic – you may even look for an uprated water pump or make sure yours is working at its best.

You also need to think about what happens should you decide to get the car setup professionally on a rolling road (which you really should or you’re wasting money) – that’s further expense and a rolling road will absolutely beast your car and transmission – it’s much harder on the car than fast driving on the highway.

All in, I’d say go for it if you want that extra power … to find that power with mechanical upgrades (retaining the naturally aspirated induction) would be hugely expensive and possibly make the car a pain to drive in traffic, but just be aware that this really is just the start.